About The Masutomi Museum of Geoscience 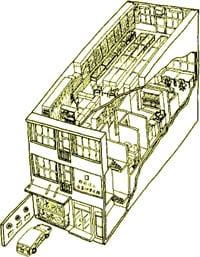 This Museum was first founded by Doctor Kazunosuke Masutomi in 1973 as "Japan Geologic Study Hall" and it was converted to the foundation whereas the name was changed to Masutomi Geology Museum in 1991. Its three-floor building is made of reinforced concrete and its floor area is 300m2, which retains 20,000 specimens and also preserves some thousands of geologic books and reports, polarized light microscopes, X-ray analysis device, and many other devices and tools. The number of books and rocks and mineral specimens increase year by year. We are proud of being famous as a museum visited by more than 10,000 people as a "Capital" of study on minerals, fossils and rocks.
The Chief Exective Kenji Tsuruta
Library is open only to our museum club members on every day except for Monday and National Holidays.
We open the museum shop on the first floor every day except for Monday. We sells books and tools for geologic research and colleciton.
We are closed from right after Christmas day through new year's days.
(If you visit us in those days, please contac us)

※If you are a group of some people and make a reservation, we will open our exhibition room even though it is week day.

Dear Foreign customers
We are trying very hard to increase the number of English pages, but it takes a lot of time.
Please be patient to wait for us to be able to make more English pages.